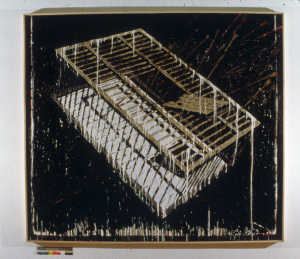 Oil on canvas, 72” x 84”.  Collection of Gail & John Enns    I was asked to do a couple of paintings for a show curated by Noriko Gambling at The Long Beach Museum of Art.  I had already done a very large chicken cage and while working on it I realized how much it looked like a famous aerial photo of Minidoka Internment Camp in Idaho.  As I painted it I thought about how people had said that the internment of Jaoanese Americans was done to  protect the Japanese Americans from the general populations.  Then I thought that these cages are said to keep the chicken safe from the fox.  Ha!  I wonder why the machine gun towers kept the guns trained inward toward the internees.   No question mark needed at the end of that sentence!